Grand National winning trainer, David Pipe, recently took some time out of his very busy schedule to talk through his thoughts on the 2014 Grand National and the prospects that he has lined up for both this year and possibly even for the 2015 renewal.

And while the 2014 Aintree spectacular may be a couple of months away, he had no hesitation in analysing both his own contenders as well as his competitors who he thinks may have the right credentials to scoop the £1,000,000 race on April 5th.

Question: You won the 2008 Grand National with Comply Or Die – can you describe the feeling when he crossed the finishing post?
DP: It was a surreal feeling and took quite some time afterwards to sink in.

Question: How far in advance do you plan a route to the Grand National for your horses and do you use specific training measures e.g. reproduction fences in their training?
DP: With some horses you know if they are going to be suited by the unique challenges of the Grand National some way in advance and can plan your entire season around heading to Aintree. Their training regime remains largely the same although for many years we have built our own replica ‘Grand National style’ fences for them to get in plenty of practice.

Question: Winning for a second time would be an incredible achievement, who of your six entries for 2014 do you think represents your best chance for that win?
DP: I would suggest that The Package and Our Father would have the right profiles for the race.

Question: Do you think that the softening of the fences at Aintree has allowed you to consider entering horses that would not have otherwise run in the race?
DP: Yes

Question: Swing Bill is 13 now and he’s one of three 13-year-olds entered. Statistically no horse aged above 12 has made the frame in the past 10 years – can he defy the odds?
DP: He has run great races in the last couple of renewals of the race and has competed over the National fences on six occasions. He seems to rise to the big occasion and really enjoys himself at Aintree, so while he will be a big price on the day, you just never know!

Question: Standing Ovation is on terrific form – if he goes to Kempton and does well will that determine whether he goes to Cheltenham or Aintree?
DP: With a current chase rating of 133 I am not sure he will get into the Grand National this year…he could be a 2015 Grand National horse.

Question: Have you any prep races in mind for The Package as we haven’t seen him so far this season?
DP: He may run at the Cheltenham Festival prior to going to Aintree.

Question: Have you had a chance to look at the other entries and who, in your opinion, would be the toughest to beat on the day?
DP: It is difficult to say at this stage although Rocky Creek looks to be tailor-made for the race in my opinion.

Question: A very tough question but if you had to choose between Dynaste winning the Gold Cup or one of your entries winning the Grand National – would you be able to choose?
DP: I would like to win both!

Asked by Facebook Fans:
Question: What did Miinehoma mean to you?
DP: Everything! He was a real character – not the easiest to ride but very genuine. He possessed plenty of ability – don’t forget he won a Sun Alliance Chase at the Cheltenham Festival and also finished third in a Cheltenham Gold Cup.

Question: Who is the stable favourite at your yard and why?
DP: Comply Or Die for winning a Grand National for me, although I have plenty of favourites for lots of different reasons

Question: Is Lough Derg enjoying his retirement?
DP: Yes, he ran in a couple of point-to-point’s and is now enjoying himself hunting.

I would like to thank David Pipe for taking the time out to answer our questions, particularly as many of them came from our Facebook followers, who like me, love their horse-racing and in particular, the Grand National! 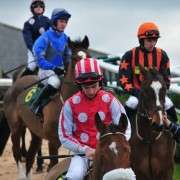 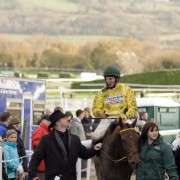 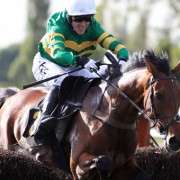 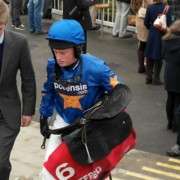 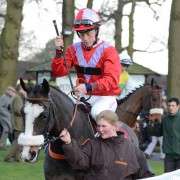 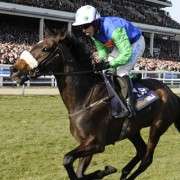 Mountainous May Bypass Aintree For Ireland
Scroll to top