Trainer Donald McCain said of Across The Bay prior to the 2013 Grand National “It seems strange that Across The Bay won a Grade Two Hurdle at Haydock and didn’t move in the betting. Yet you win a bad hurdle race in Ireland and you become favourite.”

And he wasn’t wrong for that’s indeed what did happen and despite the sterling form of Across The Bay he was only budged off a general 40/1 from the time he was entered but that could have only been good news for punters who were looking for a decent each-way bet.

Running a blinder in 2014 before getting pushed off the course by a loose horse, could only recover to finish 14th

Across The Bay was given 11-02 for the 2013 Grand National and with some great form behind him he really was one of the horses to watch as McCain was hoping for another Grand National winning trophy to sit alongside the one he won for Ballabriggs back in 2011.

Prior to the race he had 11 chase starts, winning three times and placing second three times. So more than 50% of the time he was in the money and earned connections over £126K for their trouble. 2013 was his first trip to the Grand National though he had run at Aintree on three previous occasions, placing in all three.

He was second at Aintree in December 2012 and finished seventh in the Coral Welsh National on January 5th 2013 before heading back out to win at Haydock on February 16th 2013. So his form was solid, his age and weight were ideal, the only issue was that he runs and wins on heavier ground but given how awful the weather had been last season, it may not have made that much of a difference to him.

Henry Brooke gave him a terrific ride around the course and at one point, with two fences to go he was leading but his stamina or fitness failed him and he dropped back to be over taken by the eventual winners and placers to finish in 14th place on the day.

But another year older and another year wiser and Across The Bay was back for the 2014 Crabbies Grand National and with four additional chase starts under his belt, was set to carry a little less than in 2013 at 10-11 which helped his chances.

Result: He was running a blinder in 2014 and leading the pack until a loose horse steered him of course from which he never fully recovered and had to settle for 14th place in the finishers.

Given that he will be 11 years old when the 2015 Grand National is run, he is still at a great age to contend and he clearly loves the National fences so could be in with another great shot. 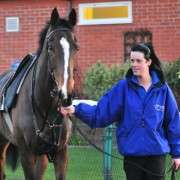 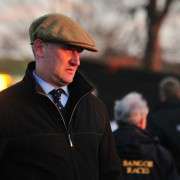 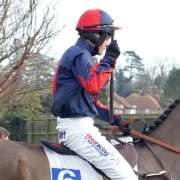 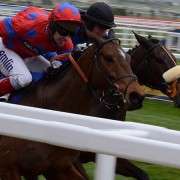 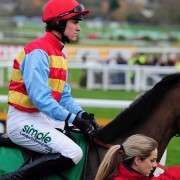