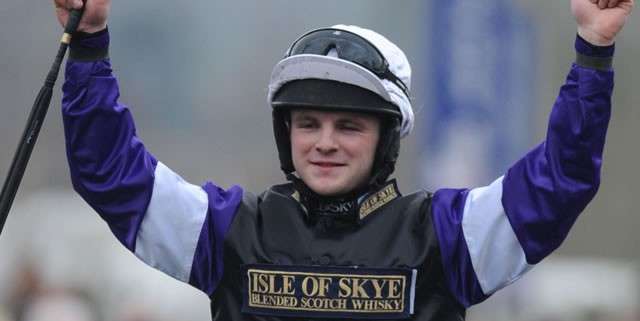 Today, on what would have been Campbell Gillies 22nd birthday, tributes have been pouring in from the Racing World as more details of his tragic accident in Corfu are released to the media.

The Scotsman, from Haddington, rode primarily for Lucinda Russell and a statement on trainer Russell’s website said: “He was a much-loved, popular and respected member at Arlary House and it is so hard to lose part of our ‘family’.”

Russell added: “We are immensely proud of the achievements of Campbell. It was through his innate ability and talent that he reached great heights as a jockey at such an early age.

“More than that, he had a wonderful charm that I believe came across to everyone who met him and through his media interviews.”

Gillies’ most recent ride was on Sunday at Hexham and he had been enjoying his most successful campaign with 38 winners in 2011-12 but it was his win with Brindisi Breeze at Cheltenham earlier in the year for Russell that was his greatest achievement. In a terrible twist of fate, Brindisi Breeze has also died in a road accident in May this year.

As Cornelius Lysaght, the BBC horse racing correspondent so aptly put it “Barely three months later, neither jockey nor horse is still with us, Brindisi Breeze himself having died in a road accident in May. Stunned is the only word to describe the feeling right across the sport at this tragedy.”

Sincerest condolences to the Gillies family on this very, very sad day.