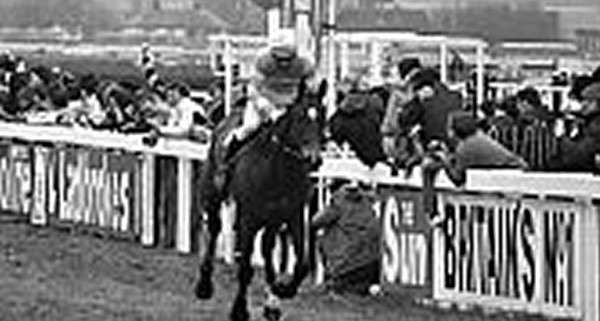 Grittar won the 1982 Grand National in a time of 9 minutes and 12.6 seconds winning a prize of £52,507 for his owner. Nine year old Grittar was owned and trained by Frank H Gilman and ridden by amateur jockey Dick Saunders. Saunders would become the oldest jockey to ever win the Grand National to date and both jockey and horse were making their debut in the race.

A well proportioned bay with a distinctive white star, Grittar had been successful over hurdles before switching to hunter chases where he had shown form, winning four of his first five races. In 1982 only 8 competitors completed the course, one of them was female jockey Geraldine Rees who at the time was the first women to do so, she rode Cheers to eighth and last place.

Grittar had won the Fox Hunter’s Case over the Grand National fences the previous season and finished sixth in the Cheltenham Gold Cup two weeks before the National, he went off as clear favourite at a price of 7/1. Jockey Dick Saunders was his regular rider and despite having been ridden by champion jockey John Francome, who was an experienced Grand National competitor, Grittar’s owner decided to stick with the amateur.

Ten horses were eliminated at the first fence and habitual front runner Delmoss led for the first half of the race. In a copy book ride Saunders and Grittar managed to avoid the melee at the first and by the second Becher’s had taken the lead. Saunders pressed the button and Grittar won by a very comfortable 15 lengths from Hard Outlook and Loving Words, who had been re-mounted during the race, took 3rd place with Delmoss in 4th position.

Dick Saunder’s retired immediately after the race and became Chairman of the Aintree stewards. Grittar made two further Grand National appearances and in 1983 he went off as the 6/1 favourite finishing fifth. The following year John Francome rode him to tenth position.

Grittar never won another race after his Grand National victory and retired to his owners Leicestershire base, he died aged 25.