Ben Nevis won the 1980 Grand National in a time of 10 minutes and 17.4 seconds. The 12 year old was owned by Mr R C Stewart, trained by Capt. T Forster and ridden by amateur American jockey Mr C Fenwick. 30 competitors started the race but only 4 completed the course on Aintree’s heavy ground. His trainer Capt Forster had already won the 1972 race with Well To Do and would go on to train the 1985 winner Last Suspect.

Ben Nevis had been sent to America as a six year old and won the Maryland Hunt Cup twice and a series of 12 successive races before returning to England to make his Grand National bid. In the 1979 National he was ridden by Charlie Fenwick, well backed at 14/1 his hopes were dashed when he ran into a pile up created by riderless horses at the Chair. His jockey remounted and cleared the ditch but abandoned the hopeless chase at the next fence.

Prior to the 1980 race he had still not won a race in England, had been coughing for days before the race and faced ‘heavy’ going. Rubstick, the previous years winner, went off as the favourite at 8/1 with Rough and Tumble ridden by John Francome at 11/1 and Ben Nevis priced at 40/1.

Delmoss took the lead early in the race setting a relentless pace until he was pulled up at Beacher’s, leaving Ben Nevis in the clear lead with 8 fences to victory. By the time they jumped the third last there were only 4 horses left in the race. Ben Nevis sailed over the last and powered away on the run in to win by a comfortable 20 lengths from Rough and Tumble with The Pilgarlic 3rd and Royal Stuart in 4th position.

Ben Nevis won a prize of £45,595, he retired to his American owners Maryland estate until Mr Stewart died in 1986, he was then cared for by his Grand National winning partner, jockey Charlie Fenwick. 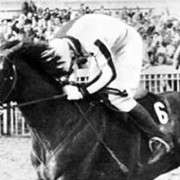 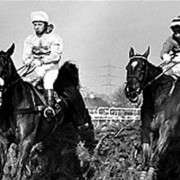