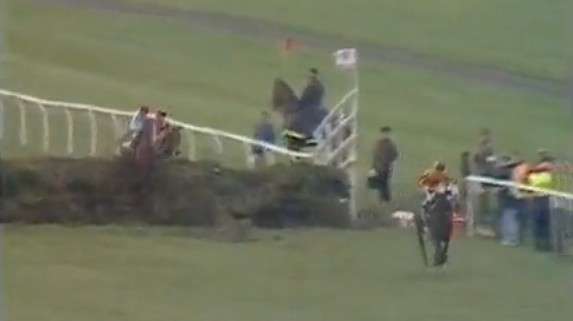 The 1991 Grand National was the last to be sponsored by the Canadian distillery Seagram and was coincidentally won by a horse of the same name. The 11 year old Seagram was owned by Sir Eric Parker and trained by David H Barons. Partnered with jockey Nigel Hawke he won in a time of nine minutes and 29.9 seconds at a price of 12/1. A maximum field of 40 horses saw 17 complete the course, sadly there was one equine fatality when after the race Ballyhane collapsed and died.

Bonanza Boy who had previously won the Welsh Grand National twice partnered by Peter Scudamore, was reunited with the jockey, to start as the 13/2 favourite. Scudamore was one of the most experienced jockey’s in the race on the day and the partnership had won the Ansell’s National Handicap Chase three weeks before the National.

Garrison Savannah was joint second favourite at 7/1 and teamed with jockey Mark Pitman, the son of his trainer, Jenny Pitman. Having already won the Cheltenham Gold Cup, the aim was for him to become the second horse ever, to win both races in the same year. Sharing co second favourite place was Rinus, ridden by Neale Doughty, he had been placed third in the previous years National.

During the race the favourite Bonanza Boy never really got in to contention, being placed at the back of the field during the first circuit and just behind the leaders second time around. Despite this in the final stages he overtook a number of tiring horses to take fifth place. Garrison Savannah ran well and at the second last took a lead of 3 lengths approaching the final fence. Clearing the fence he then increased his lead until approaching the Elbow, when his stride dramatically shortened and he appeared to be almost running on the spot.

Seagram partnered by Nigel Hawke who was making his Grand National debut, was well placed throughout the race and was one of a small group disputing the lead after jumping the Canal turn. At the final fence it looked likely he would finish in second place, however, finding a second wind he surged past a tiring Garrison Savannah to win by five lengths.

Riding the smallest horse in the race, his jockey later admitted he had settled for second place when jumping the final fence! Seagram never recaptured his Grand National winning form and on a later second appearance in the race failed to complete the course, he was retired to hunt. 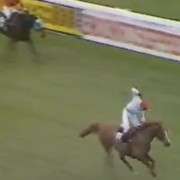